No products in the basket.
£0.00 Basket
Menu
Menu

Parchment paper and bakery release paper are cellulose-based papers that are used in baking as a disposable non-stick surface. Both are also called bakery paper or baking paper. It should not be confused with waxed paper, also known as wax paper or rarely as butter paper. 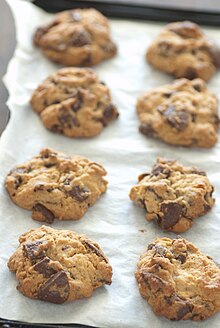 Modern parchment paper is made by running sheets of paper pulp through a bath of sulfuric acid (a method similar to how tracing paper is made) or sometimes zinc chloride. This process partially dissolves or gelatinizes the paper. This treatment forms a sulfurized cross-linked material with high density, stability, and heat resistance, and low surface energy – thereby imparting good non-stick or release properties. The treated paper has an appearance similar to that of traditional parchment, and because of its stability is sometimes used for legal purposes where traditional parchment was used.